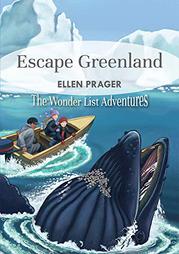 After surviving both natural hazards and hijacking by wildlife smugglers in Escape Galápagos (2019), the adventures continue for 13-year-old Ezzy Skylar and her younger brother, Luke. No sooner do they arrive with their dad in Ilulissat on Greenland’s western coast than they are embroiled in further eco-themed bad behavior. Ezzy and Luke find themselves shot at, left in a locked room, forced to make their way through a deadly iceberg field (once on foot and later by boat), and, most thrilling of all, kayaking wildly through the glacier’s interior down a meltwater tunnel. At last, however, they uncover an unethical plan to stimulate the local trade in tourists eager to see melting glaciers. Encounters with fetching sled dog puppies, impressive humpback whales, and enormous mosquitoes add lighter notes to these misadventures, and frequent references to climate change and its effects supply a unifying theme. Prager closes with notes on what is real (the science and most of the setting) and what is made up in the story. Main characters present White; some supporting characters are cued (though not named) as Inuit. The Skylar children’s judgmental statements about traditional food and hunting practices are presented with little context to help readers understand Native Greenlandic perspectives. Illustrations not seen.