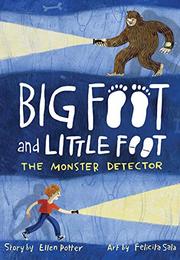 Sasquatch Hugo and human Boone deal with monsters, stereotypes, and cultural misunderstandings in the follow-up to Big Foot and Little Foot (2018).

After three years spent collecting wrappers from Mad Marvin’s Monster Cards, Hugo has finally saved up enough to send in for a prize. What arrives is a wristwatch-style monster detector filled with weechie-weechie moths that will flap their wings noisily when monsters are near. Exploring Widdershins Cavern in search of monsters, the detector guides Hugo to a secret entrance to the Big Wide World—where green fur and bones indicate the presence of the Green Whistler, a creature rumored to eat young squidges like him. Meanwhile, home-schooled Boone turns up at the Academy for Curious Squidges, wanting to attend; while only one of the sasquatch kids is openly prejudiced against humans, Boone endures an escalating string of misunderstandings that’s ended only by another crisis—the reappearance of the Green Whistler. Budding cryptozoologists Boone and Hugo pursue only to discover one last misunderstanding and a family history of cross-species friendship. The sasquatch humor and heroes’ earnestness make for a compelling story with natural flow, and the turnabout scenarios in which white Boone operates as a minority among the sasquatches are thoughtfully done.

A lovely story of using empathy to work through culture clashes.