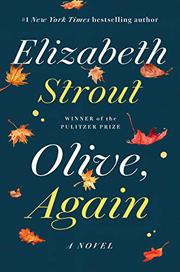 The thorny matriarch of Crosby, Maine, makes a welcome return.

As in Strout’s Pulitzer Prize–winning Olive Kitteridge (2008, etc.), the formidable title character is always a presence but not always onstage in these 13 interconnected tales of loneliness, loss, and love in its many flawed incarnations. Olive has not become any easier to like since her husband, Henry, died two years ago; “stupid” is a favorite adjective, and “phooey to you” a frequent term of dismissal. But over the course of about a decade we see Olive struggling, in her flinty way, to become “oh, just a tiny—tiny—bit better as a person.” Her second marriage, to Jack Kennison, helps. “I like you, Olive,” he says. “I’m not sure why, really. But I do.” Readers will feel the same, as she brusquely comforts a former student with cancer in “Light” and commiserates with the grieving daughter-in-law she has never much liked in “Motherless Child.” Yet that story ends with Olive’s desolate conclusion that she is largely responsible for her fraught relationship with her son: “She herself had [raised] a motherless child.” Parents are estranged from children, husbands from wives, siblings from each other in this keening portrait of a world in which each of us is fundamentally alone and never truly knows even those we love the most. This is not the whole story, Strout demonstrates with her customary empathy and richness of detail. “You must have been a very good mother,” Olive’s doctor says after observing Christopher in devoted attendance at the hospital after she has a heart attack, and the daughter of an alcoholic mother and dismissive, abusive father finds a nurturing substitute in her parents’ lawyer in “Helped.” The beauty of the natural world provides a sustaining counterpoint to charged human interactions in which “there were so many things that could not be said.” There’s no simple truth about human existence, Strout reminds us, only wonderful, painful complexity. “Well, that’s life," Olive says. "Nothing you can do about it.”

Beautifully written and alive with compassion, at times almost unbearably poignant. A thrilling book in every way.