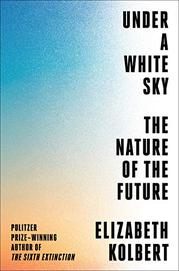 UNDER A WHITE SKY

The Nature of the Future

More top-notch environmental reportage from the Pulitzer Prize–winning author of The Sixth Extinction.

In the manner of fellow New Yorker contributor John McPhee, every paragraph of Kolbert’s books has a mountain of reading and reporting behind it. In her latest, the author opens with a consideration of America’s most important waterways, the Mississippi and the Great Lakes, which meet near Chicago but “are—or were—distinct aquatic worlds.” We learn the reason for the past tense via Kolbert’s sharp account of the overweening engineering project that reversed the flow of Chicago’s wastewaters to send them not into the lakes but into the river. This created an artificial channel that has allowed invasive species from the south, such as Asian carp, into the lakes and creatures such as the zebra mussel from the lakes into the river. Things are no better down south in New Orleans, where the author finds a Mississippi Delta inundated by rising seas. “If Delaware or Rhode Island had lost that much territory,” she writes, “America would have only forty-nine states. Every hour and a half, Louisiana sheds another football field’s worth of land.” All of these processes feed neatly into Kolbert’s overarching theme of human-caused disasters. Her travels are wide and often challenging, as when she visited remote waterholes in the Mojave Desert to examine isolated populations of pupfish or when she interviewed ornithologists and entomologists to better understand the staggering decline in avian and insect species. “Even among insects, a class long thought to be extinction-resistant, numbers are plunging,” she writes, a process that extends across ecosystems everywhere. Especially vulnerable are coral reefs, which Kolbert examines in meticulous, exquisite detail. Can we and the world be saved from ourselves? That’s an up-in-the-air question, but the author holds out hope in a program that makes use of geoengineering, which, though highly speculative, is something that must be considered.

Urgent, absolutely necessary reading as a portrait of our devastated planet.