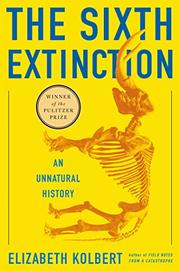 New Yorker staff writer Kolbert (Field Notes from a Catastrophe: Man, Nature, and Climate Change, 2006, etc.) returns with a deft examination of the startling losses of the sixth mass extinction occurring at this moment and the sobering, underlying cause: humans.

Although “background extinction” continuously occurs in varying slow rates among species, five major mass extinctions mark the past. Scientists theorize that all of these—from the extinction of the Ordovician period, which was caused by glaciation, to the end of the Cretaceous, caused by the impact of a celestial body on the Earth’s surface—were the results of natural phenomena. Today, however, countless species are being wiped out due to human impact. Global warming, ocean acidification and the introduction of invasive species to new continents are only a few ways that we are perpetrating harsh new realities for those organisms unable to withstand radical change. Kolbert documents her travels across the globe, tracing the endangerment or demise of such species as the Panamanian golden frog, the Sumatran rhino and many more. The author skillfully highlights the historical figures key to the understanding of the planet’s past and present turmoil, including Charles Darwin and Georges Cuvier, the first to theorize extinction as a concept. Throughout her extensive and passionately collected research, Kolbert offers a highly readable, enlightening report on the global and historical impact of humans, “one weedy species” that may offer valiant efforts to save endangered species but who are continually causing vast, severe change. Kolbert also weaves a relatable element into the at-times heavily scientific discussion, bringing the sites of past and present extinctions vividly to life with fascinating information that will linger with readers long after they close the book.

A highly significant eye-opener rich in facts and enjoyment.