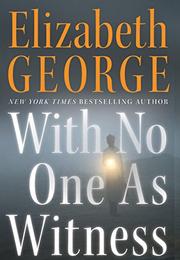 WITH NO ONE AS WITNESS

All hell breaks loose when darling young white female impersonator Kimmo Thorne is found dead with burned palms, a bloody symbol on his forehead and a missing navel. Turns out New Scotland Yard is only now cottoning to the work of a serial killer, although three other lads, all black, have died in like fashion. To stem accusations of institutional racism, Assistant Commissioner Sir David Hillier promotes Winston Nkata to sergeant, displays him during press briefings, and insists that Lynley, nominally in charge, allow profiler Dr. Hamish Robson any information collected and that a tabloid journalist be imbedded with the incident team. Lynley, Havers and Nkata identify the dead boys and follow leads to Colossus, a kids-at-risk operation whose do-gooder staff and volunteers have dicey backgrounds themselves, and to a magic shop in Camden Lock Market that has ties to MABIL (Men and Boys in Love), a group of adult men devoted to sodomy. Meanwhile, the director of Colossus, Ulrike Ellis, attempting to whitewash her agency, winds up in the killer’s van and Lynley must deal with a tragedy on his Eaton Square doorstep.

As usual, there’s still more angst for Lynley, who this time is so overwhelmed he turns in his badge. But George mostly de-purples her prose—even while letting her serial killer blather on.