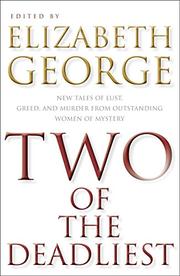 TWO OF THE DEADLIEST

New Tales of Lust, Greed, and Murder From Outstanding Women of Mystery

Greed and lust are the driving forces in 23 new stories by female authors.

Among the best offerings from more practiced veterans are Nancy Pickard’s paean to the comforts of cake (“Dark Chocolate”); Marcia Talley’s eavesdropping on a cell-phone user (“Can You Hear Me Now?”); Wendy Hornsby’s ricochet through Jack London’s life (“The Violinist”); Laura Lippman’s portrait of a middle-aged woman as crafty as she is invisible (“Cougar”); S.J. Rozan’s soliloquy of a frame-up (“Cold, Hard Facts”); Linda Barnes’s valentine to Sherlock Holmes lovers (“Catch Your Death”); and editor George’s inheritance boomerang (“Lusting for Jenny, Inverted”). Less successful are outings by Carolyn Hart, Dana Stabenow, Marcia Muller and eight others. Newcomer Barbara Fryer tops the list of past and present students of George with “The Runaway Camel,” an offbeat look at an obsessed fan who becomes the victim of an obsession herself.

As you might expect, George, known for many virtues that don’t include concision (Careless in Red, 2008, etc.), does let her contributors run on, but on the whole she pieces together a readable if not terribly innovative anthology.