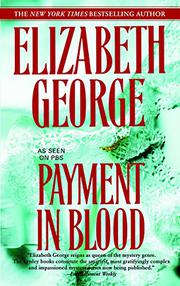 Not quite as dazzling as its predecessor (A Great Deliverance, 1988) but still complex, rich, and accomplished enough to elbow the author between P.D. James and Ruth Rendell to form the new triumvirate of English psychological suspense. Here, Scotland Yard Inspector Thomas Lynley, his pugnacious, definitely non-U partner Sergeant Barbara Havers, and Lynley's good friend forensic scientist Simon Allcourt-St. James are (curiously) sent to Scotland (beyond their jurisdiction) to uncover (cover up?) the murder of author Joy Sinclair—who was snowbound at an isolated estate with her play's director, producer, stars (including her sister), a drama critic, the widowed lady of the manor (the producer's sister), and the help (young Gowan is soon scalded and stabbed too). While Lynley—in a jealous pique—fixes blame on the director (he and Lynley love the same woman), St. James and Havers focus on the author's newly revised work: Could the murder motive connect to it and to the unkempt family grave dating back to 1963 (and MI5 concerns)? Following other clues (and bolstering his suspicions), Lynley arrives in Porthill Green and attempts to link up the revised work (which has been confiscated by. . .?) with the 1973 suicide/murder of Hannah Darrow—back then, Mrs. Darrow was fatally familiar with one lackluster member of the Scottish theatrical entourage who played her town in stock. The resolution comes at the expense of several family secrets, one spy scandal, Lynley's personal happiness and, assuredly, a less-than-finest hour for the Yard's integrity. Clearly in the process of developing and maturing her permanent cast (Lynley; Havers; St. James; his wife Deborah; his associate, and Lynley's unconsummated love—Lady Helen), George demonstrates an unusual proficiency for dealing with lots of characters without stooping to cliches. Equally deft: the interweaving here of many disparate storylines; a Christie-crisp placement of clues; and her portrayal of the down side of love and responsibility. A major talent likely to influence the direction of the crime novel for years to come.