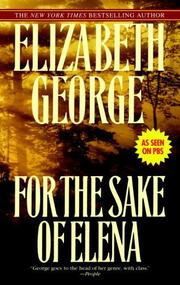 FOR THE SAKE OF ELENA

The fifth outing for Scotland Yard's Inspector Lynley (rich, sleek aristocrat) and Sergeant Havers (rough-edged, bitter plain-Jane)—this time called up to Cambridge to investigate the brutal murder of a sexy, unstable, deaf student. Who ambushed Elena Weaver during one of her usual early-morning runs and pummeled her to death? Suspects abound—especially once an autopsy reveals that Elena was pregnant. She had accused one teacher of sexual harassment, had been having an affair with another (married) one. She'd also been involved with a deaf-rights activist. Meanwhile, she was having stormy times with her overprotective father, a Cambridge don hoping for a major new appointment, and with her edgy stepmother. And is it just coincidence that the woman who finds Elena's body, an important local artist, was the sometime mistress of Elena's father? As usual, George lays on the psychosexual Sturm und Drang with a sure, if slightly heavy, hand; the dialogue occasionally thickens into awkward, stagy speeches. Also as usual, the sleuths contend with personal anguish: Havers must deal with a senile mum; Lynley continues his tediously drawn-out courtship of lady Helen—an overwrought imitation of Lord Peter and Miss Vane. But, though uneven and puffy, this is George's best work since her debut (A Great Deliverance)—a generally absorbing job in the P.D. James manner, without the excesses and missteps of the other Lynley/Havers outings.