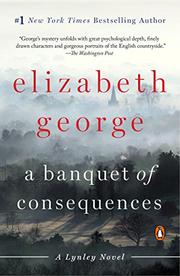 A BANQUET OF CONSEQUENCES

The courtly Inspector Lynley and rougher-edged Sgt. Havers meet again for another adventure in genteel mayhem.

Is anyone in England happy? Not to gauge by this latest yarn of George’s (Just One Evil Act, 2013, etc.), which ranges from the white cliffs of Dorset to the whiter districts of London. Young William Goldacre, on the face of it, is aptly named: he has a girlfriend who's affectionate, if “a pierced and tattooed creature” with an unusual-enough look to scare the country gentry, and he’s a wizard in the garden, “expert, visionary, artist, and laborer.” So why did Will sneak off and throw himself into the churning sea as if an extra in Quadrophenia? That’s a question for psychologists to ponder. If, that is, they have a minute to spare, for the self-help author caught up in events turns up dead, too, and those on whom suspicion falls have problems of their own: the author’s editor goes around with a PAD—a “psychological assistance dog,” that is—while Will’s mum, who’s bound up in all this mess, may or may not be a pathological liar with a murderous streak. Meanwhile, Inspector Lynley, who knows his way around a martini glass and the Tate, finds himself in conversations about just why Sgt. Havers never bothers to fix her hair. Caught up in the slough of despond, the assorted cast should barely have energy to commit crime and cover it up, much less solve the mischief. Yet they manage to pull themselves together and do that heavy lifting. Heaviness, too, figures into the tale, as does depression, madness, jealousy, and the ordinary misunderstandings—a trademark George scenario, that is, including apparent mishaps that have more sinister causes.

In her 20th mystery, George delivers just what she always has: storylines that take a long time to resolve and narratives that are a shade too long but that in the end are always satisfying.