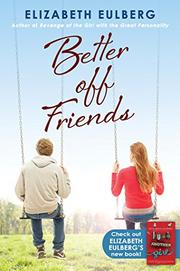 Best friends Levi and Macallan struggle with their close relationship in this lighthearted and at times too sweet romantic comedy.

When they meet as new seventh graders, Macallan is grieving her mother’s recent death and finds support in Levi and his loving mother, who’ve just moved to Wisconsin from California due to his father’s job. In dialogue-driven vignettes, the two swap turns as first-person protagonist over the next five years as they date various others, declare themselves just friends and discover they have romantic feelings for one another—but seemingly never at the same time. Punctuating the narrative are short, present-day conversations in which they playfully rib each other about their past missteps. While it’s not revealed until the end whether or not they do so as a couple or just as friends, it’s clear that whatever the outcome, they are still a pair in some form, which somewhat lessens the dramatic tension. Some readers will appreciate the lack of swearing throughout, though others may find it unrealistic for a teen among friends to use a phrase like “[a] pain in the rear.” Secondary characters in Macallan’s family, including grandparents who live in Ireland and an uncle who is developmentally disabled, add dimension but are not especially developed.  A fun if lightweight read that will appeal widely to romance fans. (Fiction. 12-18)