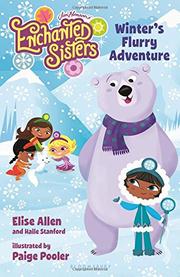 The Seasonal Sparkles return in an adventure about friendship, fairness and jealousy.

Winter, the Sparkle responsible for causing winter in the human world, lives in her icy Sparkledom with her pet and best friend, Flurry the polar bear. While Winter and Flurry build a giant snow fort one day to impress her sisters, they discover a baby fox. Winter fawns over the cute fox, neglecting Flurry and sparking his jealousy. Hurt, he takes off—tunneling straight into the Barrens, the land inhabited by the villainous Bluster Tempest and his counterparts to the Sparkles, the Weeds boys. Accompanied by her sisters and the baby fox, Winter goes on a quest to get her best friend back. Along the way they face nasty surprises—booby traps left by the Weeds range from dangerous (giant mouse traps and Indiana Jones–style spikes triggered by sensors in the floor) to hilariously unpleasant (a smell so bad that Winter says “It’s like someone pooped in my nose!”). When they find Flurry, he’s less in need of rescue than they anticipated—the Weeds have adopted him and renamed him Butch. Worse, he might not even want to come home. Winter has to leave the decision up to him—the less-than-considerate nature of the Weeds along with Winter’s unconditional apology win the day.

A simple lesson jazzed up by obstacles.