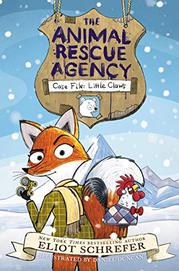 Mother polar bear Big Claws and her baby, Little Claws, emerge from hibernation only to have Little Claws fall into a trap that leaves him stranded on an ice floe. Big Claws’ message for help sets Esquire and Mr. Pepper into action. They hop on a train to Anchorage, then dog-sled to Utqiagvik, Alaska, as the story plunges them into intrigue and action, working against an openly evil wild-animal trafficker. Although the action maintains a steady pace—with captures and escapes aplenty—certain plot elements fall apart under scrutiny. Instead, the focus is on the duo’s dynamic, crotchety and full of good-natured insults. Esquire’s dashing and flashy—down to her fashion statements—while business-minded Mr. Pepper tends toward the practical. Utqiagvik’s description isn’t exactly flattering, even given the vulpine perspective, and readers looking for Alaskan Native representation there will be disappointed. The villain is the only human character, described as “gray” but presenting White and looking like a fur hat–wearing Capt. Hook in the cartoon art. Backmatter includes information on how climate change threatens polar bears, along with Mr. Pepper’s recipe for mushroom jerky (a favorite of Esquire’s, who’s sworn off eating animals). Esquire, unlike the other animals, is highly anthropomorphized in the art, mostly going about on two feet. Only she and Mr. Pepper wear clothing.

A well-meaning but only partially successful series opener.