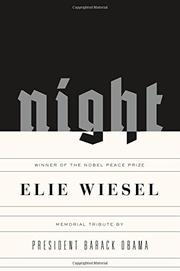 A reissue of Wiesel’s (Open Heart, 2012, etc.) foundational, exemplary memoir of the Holocaust.

Even though bracketed by post-mortem appreciations by Barack Obama, genocide scholar and former U.N. ambassador Samantha Power, and Wiesel’s son Elisha and including Wiesel’s Nobel Prize acceptance speech and lecture and a commemorative address before the U.N., Night is a slender book, just a shade more than 100 pages long. But it packs a whole world—perhaps better, a whole inferno—into that brief span, much trimmed from a draft reported to be eight times longer. As the memoir opens, Wiesel is a schoolboy in a Transylvanian town, studying with a wise scholar named Moishe the Beadle, who liked to say, “Man comes closer to God through the questions he asks Him.” The great question that emerges as events sweep in, brought to Sighet on German troop transports and Hungarian police vans, is, of course, why? No fully satisfactory answer ever emerges from Wiesel’s tour of the hell that ensues, as the ghetto—“ruled by neither German nor Jew; it was ruled by delusion”—gives way to the concentration camp and its endless brutalities, administered by Germans and kapos alike. As he recounts the flight before the advancing Red Army deep into a collapsing Germany, Wiesel draws on the voices of many of his fellow inmates, one of whom memorably says of Adolf Hitler, “he alone has kept his promises, all his promises, to the Jewish people.” Only the promise of utter extermination goes unfulfilled, leaving the author to contemplate the dead man walking that he has become when the camp is finally liberated: “The look in his eyes as he gazed at me has never left me.”

Wiesel’s memoir, first published in English in 1960, has emerged as a classic work of literature from that darkest of eras, and it deserves to be read and reread for decades to come.