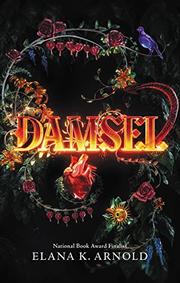 Arnold (Bat and the Waiting Game, 2018, etc.) blends an abusive romance-novel relationship and intense feminist and patriarchal imagery with the classic storyline of a prince saving a damsel from the lair of a dragon.

In a gray, medieval world, Prince Emory of Harding makes his way toward a dragon’s lair to rescue a damsel and make her his bride, in the process bringing light to the land and glory upon himself. The damsel cannot recall who she is, and so Emory names her Ama. They return to Harding, where Prince Emory is crowned king, and his mother announces they will be wed in a few months’ time, and Ama will give birth to his heir. Ama must learn how to be a queen and is reminded repeatedly that Emory’s desires are what matters—she is never allowed to forget that he “saved” her. When she does not comply with his wishes, she is brutally and sadistically punished, sexually, psychologically, and physically. What if, instead of being the hero’s beloved, you are your abuser’s captive? The symbolism and imagery, as well as the meaning of the sexual violence that is perpetrated upon Ama, may go over the heads of less sophisticated readers. All characters are white.

While Arnold has written a compelling flipped fairy tale and commentary on misogyny, she’s missed the mark for her intended audience.