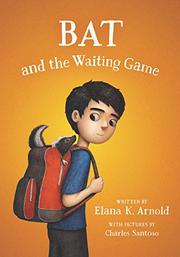 BAT AND THE WAITING GAME

It’s easy to read between the lines and imagine that might not end with a sweet smell. Bat’s older sister, Janie, has just won a leading role in the school musical. Her interactions with friends and preparation for the play weave in and out of Bat’s less-typical experiences as he navigates the complexities of friendship with white classmate Israel, tries to live up to his Chinese-American father’s sometimes-unrealistic expectations, and manages the needs of Thor under the compassionate supervision of his white mom, a veterinarian. She and his teacher both have effective ways of helping Bat when he starts to lose control, and Israel matter-of-factly reminds him when he ought to be more polite. Bat’s differences are there, but they never dominate the story, which focuses on the challenges of getting along with siblings and Bat’s awareness that Thor is growing up and will have to be released eventually. That’s made all the more evident when he tucks the skunk into his shirt and takes him to the play, where the inevitable occurs, emptying the auditorium during Janie’s solo and ending the show under smelly circumstances.

A gentle tale of shared similarities rather than differences that divide and a fine read-aloud with a useful but not didactic message of acceptance.