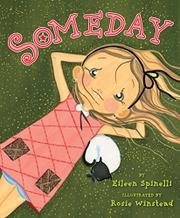 What little girl (or boy) doesn’t fantasize about what the future may bring? Told in first-person voice and illustrated with contrasting double spreads, a girl imagines what she’ll do Someday, but Today, she is doing everyday things; i.e. “Someday I’ll ride a dolphin named Wilma who tells me secrets of the sea, but Today I’m feeding my pet goldfish named Pumpkin who doesn’t talk to me.” She dreams of discovering dinosaur bones (but today, her digging is under the sofa cushions for coins), being invited to the White House (instead she’s having lunch with her cousin who talks with his mouthfull) and winning a gymnastics gold medal at the Olympics (she’s really practicing cartwheels in her back yard). Collage art carries off the juxtaposed dreamy visions/ordinary routines and adds subtle touches like the white cat with black head, paws and tail that appears in every scene. The girl with her long blond braid, freckled cheeks, overbite and pierced ears looks innocently plucky. Charmingly depicted and child appealing, kids will respond to the subtle message that it’s okay to dream big. (Picture book. 4-7)