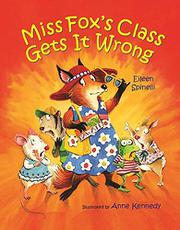 MISS FOX'S CLASS GETS IT WRONG

When her class starts to see Miss Fox in the frequent company of Officer Blue Fox, rumors start to fly that their teacher is in trouble with the law.

Young Bear sees the officer stop Miss Fox on her bike. He tells his classmates. Then Frog sees the policeman escorting his teacher into the police station. He shares, as well. And when the class starts seeing the pair together more often, the rumors and gossip really get going. They wonder why she is in so much trouble—after all, “Miss Fox believe[s] in peace. And in recycling.” They spy her in a floppy red hat and sunglasses “disguise” and then spot her placing a suitcase in her car. But the straw that breaks the proverbial camel’s back is the travel brochure on Miss Fox’s desk. They rush to assure their beloved teacher (who is accompanied by Officer Blue Fox!) that they will visit her in jail. Adults, and some children, will see the resolution coming a mile away. But their teacher cannot leave for her honeymoon without one last lesson about getting all the facts straight before spreading stories about other people. Kennedy’s anthropomorphized multi-species cast of characters is as charming and expressive as ever, especially when envisioning Miss Fox in black-and-white stripes. Sly clues sprinkled throughout point readers to the big reveal at the end.

This lesson on gossip and rumors goes down like a spoonful of sugar.