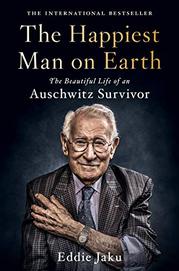 THE HAPPIEST MAN ON EARTH

The Beautiful Life of an Auschwitz Survivor

Uplifting memoir from a Holocaust survivor.

After Hitler took power in 1933, he expelled all Jewish students from schools, include the teenage Jaku (b. 1920), member of a prosperous Leipzig family. Using his influence in the community, the author’s father obtained false papers for his son and enrolled him in an elite engineering school far across the country. After five years of living alone as a gentile under an assumed name, he graduated at the top of his class. In November 1938, hoping to surprise his parents on their 20th wedding anniversary, he returned home only to find the house empty. His parents were in hiding because it was the infamous Kristallnacht, when Jews endured massive atrocities across Germany. That evening, thugs beat him brutally before sending him to the new Buchenwald concentration camp, where he remained for six months under appalling conditions. Upon his discharge, his family fled to Belgium. After the Nazi invasion in May 1940, he fled again, walking to the south of France, where he was arrested. After spending seven months in a French concentration camp, he was loaded onto a train for Auschwitz but escaped and made his way back to Belgium to join his family in hiding. All were arrested in 1943 and sent to Auschwitz, where his parents were killed and he became a slave laborer. Readers will be horrified by Jaku’s painful description of the unspeakable conditions and sadistic treatment he received. He survived only through determination, cooperation with a friend, luck, and his engineering skills, which gave him some privileges. After the war, he returned to Belgium and married, but he found the country unwelcoming and moved to Australia, where he still lives with his wife and large family. Some readers may find Jaku’s account of his long, prosperous life after Auschwitz anticlimactic, but no one will deny that he deserves it.

A solid addition to Holocaust literature.