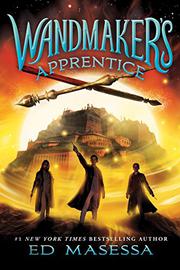 From the Wandmaker series, volume 2

The defeat of an evil spellcaster reveals another more dangerous foe in this sequel to Wandmaker (2016), forcing a new generation of Wandmakers to take up the challenge and save the world.

Henry and his sister, Brianna, both white, join four other young apprentices at Castle Coralis deep in the Carpathian Mountains. There, they train under Coralis, a powerful Wand Master. The arrivals of Luis from Ecuador and Katelyn from Ireland force Henry and Serena, a Navajo girl, to confront their growing feelings for one another. And the addition of Inuit Bryndis from Greenland only deepens the conflict. But with spells to learn, weapons to master, and a dangerous enemy on the rise, there is little time for romance. Each apprentice begins to grow in his or her power, finding strength in the four elements of fire, water, earth, and air. But Henry has a greater calling. While the characters are diverse and intriguing, their respective cultures go largely unexplored, and their interactions are often stilted. The sense of impending danger often wanes as the plot wanders, but readers willing to press through will be rewarded. This interesting blend of romance and adventure will appeal to fans of the works of J.K. Rowling, Rick Riordan, and Brandon Mull.

A sequel that ought to satisfy fans of the first.