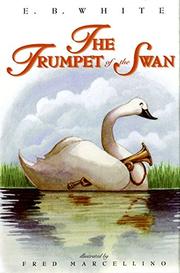 THE TRUMPET OF THE SWAN

But (one may counter) "When Mrs. Frederick C. Little's second son was born, everyone noticed that he was not much bigger than a mouse." So he was, in the first sentence, while Louis the Swan's peculiar problem comes to light slowly in the Canadian wilderness where Sam Beaver and his father are camping, the better to fish (Mr. Beaver) and explore (Sam). He exults in watching wild creatures in wild places—now the two trumpeter swans and their nest, then the fifth cygnet who, unable to beep, takes hold of his shoelace and gives it a pull, "like a greeting." Meanwhile the long-winded father swan, the cob, and his commonsensical wife grow concerned about Louis' handicap (if he can't trumpet how will he attract a mate?) and Louis, at the family's winter base in Montana, determines to "develop myself along other lines": he will seek out Sam and learn to read and write. Which done—in Mrs. Hammerbottom's first grade—he returns with slate and chalk, extends an eager "Hi, there," and draws a blank; nor does Serena, his chosen one, respond to his desperate "I love you." Now the cob, who's considered it, will have to go to Billings and get Louis a trumpet. It is this theft, and the need to make restitution (they are "by nature law-abiding"), that starts Louis on his remarkable career, first, coached by Sam, as Camp Kookooskoos' official trumpeter (and emergency life-saver), then as accompanist for the Swan Boats in Boston's Public Garden (where "There's a Small Hotel," the Ritz Carlton), finally as top attraction at a Philadelphia night club. Bird Lake in the Zoo offers temporary refuge, and there Serena blows in (literally), to be awakened with "Beau—ti—ful dream—er. . . " and won forever. At last Louis, a rich bird, can return home; his father, boasting manfully, can redeem the family honor; and the storekeeper, overcompensated, can only wonder. . . while Serena and Louis content themselves with annual sorties to the scenes of his triumphs. The start is a jolt, and subsequently there are breaks (Louis has had no prior exposure to the written word) and some big accidents—especially Serena's abrupt reappearance. However, when Louis raises his trumpet—to serenade the skeptical hotel clerk, for instance—or Mr. White pinions human foibles—"Kookooskoos" because "a boy's camp should have a peculiar name"—reservations have a way of evaporating.