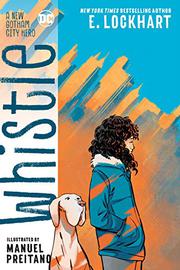 Origin story 101: a difficult backstory (Willow’s mother has cancer and they can’t afford treatment); the onset of powers (a Killer Croc attack somehow makes Willow able to communicate with the stray dog she’s befriended); the moral quandary (Willow’s financial savior is her mother’s estranged friend E. Nigma, better known to DC fans as the Riddler); and finally, the decision to take on a secret identity (the titular Whistle). The script offers some exciting changes to the formula: Willow Zimmerman is explicitly Jewish, while (new to DC lore) neighborhood Down River has a multiethnic, Lower East Side feel—and teenage Willow is emphatically not a sidekick. The dialogue lacks subtlety but moves the story along, although the overreliance on expository captions highlights the fact that the versatile Lockhart hasn’t previously worked in comics. The moody illustrations pair easy-to-follow large panels with occasional full-page spreads. Warm orange fills Willow’s scenes and conveys her warmth and fire for justice; when the action moves to E. Nigma and Pammie Isley (another Gotham villain), the cool white and greens predominate, fitting the calculated machinations happening off-page. As befits an origin story, the superhero/vigilante element is relegated to the back half. The villains read as White; the background cast reflects the diversity of New York City.