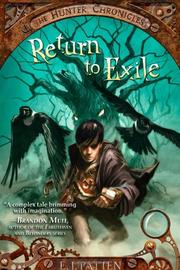 From the Hunter Chronicles series, volume 1

A preteen with a shadowy past and two odd scars on his palm is cast into a small town’s ongoing struggle among multiple kinds of monsters and warring factions of monster hunters in this hefty setup volume.

It’s a muddle, and readers are as likely to flounder as Sky does. In a vision, he sees his beloved old mentor Phineas being ambushed; he narrowly escapes attack by ravening Shadow Wargs on the grounds of a decrepit old estate; he has multiple run ins with verbally abusive teachers, violent bullies and nearly-as-hostile allies at his new school. The author stocks a huge cast with shapechangers (some of whom can and do adopt multiple guises), monsters of his own creation ranging from luridly vicious “wargarous” to “double bogies” and “screaming wedgies” and humans like Sky’s supposed parents, who plainly know more than they’re telling. Patten parcels out the details of a confusingly complex back story and the impending crisis du jour—a creature of, supposedly, stupendous evil poised to escape a time trap on the aforementioned estate—in driblets, while splashing the plot with extreme but oddly nonfatal violence and tongue-in-cheek dialogue. “And trust me—it’s not as hopeless as it looks. It’s much, much worse. Ready?” Splashes and splatters likewise frame Rocco’s chapter head spot art.