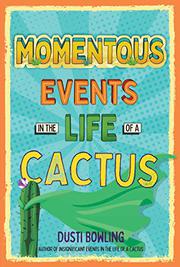 MOMENTOUS EVENTS IN THE LIFE OF A CACTUS

From the Life of a Cactus series

In the sequel to Insignificant Events in the Life of a Cactus (2017), Aven Green confronts her biggest challenge yet: surviving high school without arms.

Fourteen-year-old Aven has just settled into life at Stagecoach Pass with her adoptive parents when everything changes again. She’s entering high school, which means that 2,300 new kids will stare at her missing arms—and her feet, which do almost everything hands can (except, alas, air quotes). Aven resolves to be “blasé” and field her classmates’ pranks with aplomb, but a humiliating betrayal shakes her self-confidence. Even her friendships feel unsteady. Her friend Connor’s moved away and made a new friend who, like him, has Tourette’s syndrome: a girl. And is Lando, her friend Zion’s popular older brother, being sweet to Aven out of pity—or something more? Bowling keenly depicts the universal awkwardness of adolescence and the particular self-consciousness of navigating a disability. Aven’s “armless-girl problems” realistically grow thornier in this outing, touching on such tough topics as death and aging, but warm, quirky secondary characters lend support. A few preachy epiphanies notwithstanding, Aven’s honest, witty voice shines—whether out-of-reach vending-machine snacks are “taunting” her or she’s nursing heartaches. A subplot exploring Aven’s curiosity about her biological father resolves with a touching twist. Most characters, including Aven, appear white; Zion and Lando are black.

Those preparing to “slay the sucktastic beast known as high school” will particularly appreciate this spirited read.