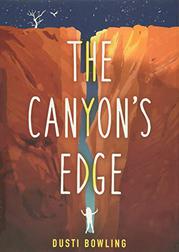 Last year’s celebration at a restaurant ended in an unexplained public shooting, and Nora’s mother died. She and her father are still wrestling with their trauma, Nora with a confirmed diagnosis of PTSD. For this year’s outing, Nora and her father head into the deserts of the Southwest on a rock-climbing expedition. They descend into a 40-foot deep slot canyon, then hike along inside until a flash flood barrels through the canyon, washing away all their supplies…and Nora’s father. She’s left to survive this symbolic and living nightmare on her own. Thankfully, she can make continuous use of her parents’ thorough training in desert knowledge. Brief sections of prose bracket the meat of the story, which is in verse, a choice highly effective in setting tone and emotional resonance for the heightened situation. Bowling’s poems run a gamut of forms, transforming the literal shape of the text just as the canyon walls surrounding Nora shape her trek. The voice of Nora’s therapist breaks through occasionally, providing a counterpoint perspective. Nora is White while two characters seen in memories have brown skin. The narrative also names local Native peoples. Elements of the survival story and psychological thriller combine with strong symbolism to weave a winding, focused, stunning narrative ultimately about the search for healing.