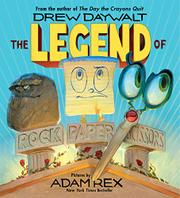 THE LEGEND OF ROCK PAPER SCISSORS

Peer through the mists and learn the origin of the game that has resolved playground disputes beyond number.

“Long ago, in an ancient and distant realm called the Kingdom of Backyard, there lived a warrior named Rock.” Rock travels far and wide searching for an adversary that might best him. The clothespin fails in battle, and the tangy sweetness of the apricot is easily squashed. Meanwhile, in the Empire of Mom’s Home Office and the Kitchen Realm, respectively, Paper and Scissors set out on similar quests. Each trounces every foe. The likes of Computer Printer cannot stand against Paper (paper jam!). And the Dinosaur-Shaped Chicken Nuggets are snipped into submission by Scissors. Then Rock meets Scissors and thrashes her. She is pleased, but Rock feels he might never find his challenger until Paper arrives, uttering the fighting words “Hi there.” The rest is history. Daywalt’s silly tale unfolds in hilariously overblown text that is further melodramatized with ample and emphatic use of various display types. It is deliciously illustrated in true Rex style with wackily anthropomorphic inanimate objects and action-packed scenes. Rock is particularly funny, depicted as a small, Easter Island–type boulder with an outsized personality. Cheeky humor and prideful asides will have listeners in stitches.

A closer-to-perfect pairing couldn’t be imagined. Everyone wins! (Picture book. 4-10)