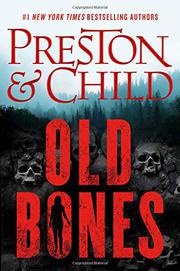 Young archaeologist Nora Kelly joins a perilous search for the Lost Camp of the Donner Party in this latest collaboration by Preston and Child (Verses for the Dead, 2018, etc.).

In 1846, westbound travelers became snowbound in the Sierra Nevada, and in “one of the greatest calamities of the westward migration,” some resorted to cannibalism in a desperate attempt to survive. Now, historian Clive Benton has the original journal of Tamzene Donner, whose body was eaten. Benton asks Kelly for her expertise in finding and studying the camp. The old bones they expect to find will have important historical significance, but Benton also confides that there may be gold coins worth $20 million hidden near the camp. Meanwhile, newly minted FBI Special Agent Corinne Swanson is assigned the case of “a dead body in a vandalized grave.” Turns out there are four grave robberies, all of descendants of the Donner disaster. Kelly and Swanson work together in a mildly testy relationship, but they’re really both pros. Other members of the team hear rumors of the gold, and tragedy strikes. As they get closer to where the Lost Camp might be, members of their expedition begin to die, and a serious storm approaches that threatens to cause a deadly avalanche. Of course, villainy is afoot that may snuff out Kelly's and Swanson’s young lives. Neither has a personal interest in gold they can’t legally possess, but others may. Yet the clever plot suggests a dark secret that lies within the bones they find. The two women are smart, likable characters, but readers ought not to take their survival for granted. Special Agent Pendergast takes a break from his own series to make a brief, consequential appearance.

Like other Preston and Child adventures, this is a smart, satisfying read.