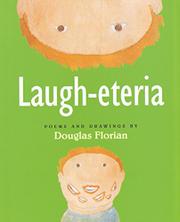 Florian’s seventh collection of verse is also his most uneven; though the flair for clever rhyme that consistently lights up his other books, beginning with Monster Motel (1993), occasionally shows itself—“Hello, my name is Dracula/My clothing is all blackula./I drive a Cadillacula./I am a maniacula”—too many of the entries are routine limericks, putdowns, character portraits, rhymed lists that fall flat on the ear, or quick quips: “It’s hard to be anonymous/When you’re a hippopotamus.” Florian’s language and simple, thick-lined cartoons illustrations are equally ingenuous, and he sticks to tried-and-true subjects, from dinosaurs to school lunch, but the well of inspiration seems dry; revisit his hilarious Bing Bang Boing (1994) instead. (index) (Poetry. 8-10)