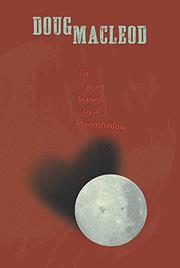 I’M BEING STALKED BY A MOONSHADOW

While not a girl-magnet like his melodramatic younger brother, budding playwright Seth Parrot, a 14-year-old Australian, leads a content life until his “alternative” parents build their dream home, literally, out of mud bricks. They “render” it with a coating of manure, bringing out the no-nonsense senior environmental-health officer and town councilor, Mr. Raven. Seth’s father accidentally (although this is questionable) flicks manure at Mr. Raven, starting a bitter war between the families. Seth also worries about his overly amorous parents’ sudden lack of interest in each other and that he’ll never find a woman as fine as Opal Honey, the muscular Ms. Olympia bronze medalist. Then he meets the toned kickboxing student, Miranda, at the Shared Learning Center his mother runs. When the teen discovers that Miranda is Mr. Raven’s daughter and Miranda’s father discovers who his daughter is dating, the battle escalates until the star-crossed couple, a wacky band of concerned citizens and Seth’s father intervene. With a fresh voice, sensitivity, dead-pan humor and myriad odd facts that he weaves into the story, Seth is irresistible. Would that more of MacLeod’s charm and humor crosses the ocean. (Fiction. YA)