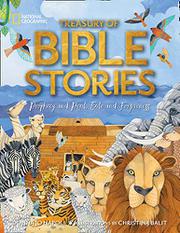 Following her Treasury of Egyptian Mythology (2013) and Tales From the Arabian Nights (2016), Napoli brings her literary eye to a yet another ancient tradition.

Napoli opens with ebullient prose in her retelling of Creation with a “wondrous beginning” and “crystalline start” leading to an Earth that is “lush” and “fragrant,” standing in pointed contrast to the sparse simplicity of the source material found in Genesis 1. Continuing onward she spends the first half of the treasury covering stories from just the first two books of the Torah, retelling the ubiquitous tale of Noah and the establishment of Jewish identity. As the Children of Israel reach the promised land, the treasury begins to diverge from a strict chronology, and succeeding entries follow the order of the Jewish canon, introducing the Nevi’im with David, Goliath, and later Jonah, then on to the Ketuvim, in which such women as Ruth and Esther shine. Title notwithstanding, this collection does not include the Christian New Testament. Balit’s bold illustrations accompany each tale and feature a diversity of skin tones that reflects the many lands from northeast Africa to the Middle East where the drama unfolds; Adam and Eve appear to be sub-Saharan Africans, echoing current thinking on human origins. Sidebars throughout add historical and scientific context to the stories presented while backmatter includes maps, timelines, and brief biographies of the major players.

A worthy cultural treasury with appeal to both the faithful and irreligious.