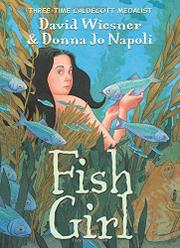 Napoli and Wiesner transport readers under the sea, introducing them to a modern-day heroine who longs to be part of their world.

In this riveting graphic novel adaptation of the famous Andersen fairy tale, the nameless mermaid character is part of an aquatic exhibit run by a man who plays the part of Neptune the sea god. Napoli and Wiesner use the form’s sparse dialogue to deftly reimagine the fairy tale’s essential elements, from the heartbreaking divide between land and sea to the indomitable heroine who is willing to risk everything to cross that barrier and follow her heart—in this case, catalyzed by her growing friendship with a human girl who visits her regularly in the aquarium. The shrewd interpretation of the tale’s sexual politics is its most striking feature. The mermaid becomes an Everygirl who discovers that her identity and personhood are subordinated to a man whose sinister charm barely conceals his marginalizing view of her as profitable merchandise. Given current events, the image of a falsely benevolent Neptune who systematically chips away at the mermaid’s self-worth feels eerily apt, rendering the mermaid’s desire for a life on land all the more poignant. Wiesner’s artwork aptly conveys the narrative’s tone, but the muted color palette makes his illustrations feel oddly inert. The mermaid, her human friend, and Neptune all have fair skin.

A thought-provoking work that is not to be missed.