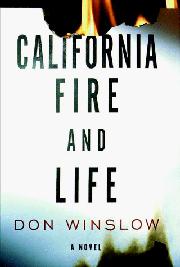 Whether you’re new to arson-fraud fiction or an old fan, this burn-by-burn account—think Double Indemnity in flames—could be the only novel on the subject you’ll ever need. Jack Wade, bounced off the Orange County Sheriff’s Office 12 years ago for beating a confession out of a suspect and lying about it under oath, has been a bulldog claims investigator for California Fire and Life Mutual ever since, but he’s about to meet his match (to make one of the few arson puns Winslow doesn’t exploit). Society fund-raiser Pamela Vale has been burned to death in a home fire that Jack’s old nemesis, fire investigator Brian Bentley, has pronounced accidental. Based on a survey of the physical evidence that would do Patricia Cornwell proud, Jack’s certain Pam Vale and her house were torched, and just as certain the arsonist is her husband Nicky, who phoned Jack to discuss his claim the morning after the blaze. Jack doesn’t know about Nicky’s ties to the KGB and the Russian mafia (which Winslow, as thorough as Jack, explains in numbing detail), but he can see that the good times had stopped rolling for the overextended developer; he doesn’t believe the alibi Nicky’s controlling mother gives him; and he’s shocked but delighted when his former lover, Sheriff’s deputy Letitia de Rio, turns out to be Pam’s half-sister. Getting their act together again, Jack and Letty build an impressive case against Nicky. But when California Fire and Life finally confronts Nicky, Jack suddenly realizes he’s been caught in as sweet a scam as he’s ever seen, with no way to avoid going down in flames (oops). Though Winslow (The Death and Life of Bobby Z, 1997, etc.) writes as crudely as he puns, his plotting is shapely and inventive, and most readers will get caught up in the tale of Jack’s treacherous descent into hot water and his miraculous escape. The whole story reads like a house afire—a real barn-burner. (First printing of 60,000)