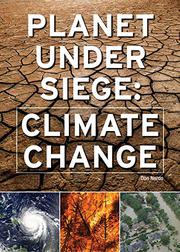 The urgency of the Earth’s changing climate is detailed in this slim, up-to-date volume.

Without pulling punches, Nardo (Ancient Mesopotamia, 2019, etc.) lays out the facts and offers an overview of different responses: 97% of climate scientists argue that human-driven climate change is endangering our future; climate change deniers are influenced by politics and/or a misunderstanding of science; and climate change skeptics disagree that human activity is the primary factor in the warming atmosphere. Evidence is presented in five chapters covering severe weather, rising sea level, the impact of climate change on global food production, species loss and biodiversity, and current efforts to fight and adapt to climate change. The journalistic narrative voice convincingly argues that climate change is not just coming; it is upon us, and its often deadly consequences affect the world’s populations in different measures, with the gap between wealthier and poorer countries widening. This unflinching call effectively conveys Earth’s dire situation; while the main text lacks a section on how readers can fight climate change and can therefore leave readers feeling discouraged, the backmatter includes references to organizations, some of which offer action steps. Readers already interested in the topic will devour this volume; for others, the large font, clear subheadings, and numerous color photographs make it easy to engage with.

Fact-based, well-documented, and accessible, this publication serves its purpose well.