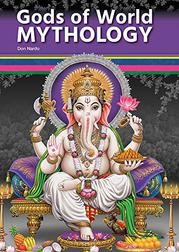 Myths and legends communicate key values and beliefs within a society, though the stories may share many similarities across time and culture.

In this brief compendium, Nardo examines common themes across mythologies pulled from around the globe. The famous mythologist Joseph Campbell and contemporary expert E.J. Michael Witzel claim that myths the world over share common themes, values, and tropes because of a shared heritage of storytelling that dates back to the earliest humans. These tales often involve powerful and wise creator deities as well as heroic humans, and each communicates something of the values and traditions of each culture to the listener or reader. This title serves as a cursory primer of several major mythical traditions from around the world. Through each retelling and subsequent background exposition, readers discover particulars about the cultures from which each myth sprang but also their many similarities. Classical historian Nardo begins with the Greco-Roman and Norse mythological traditions that Western readers are most likely already familiar with before expanding to Hindu, Chinese, Aztec, and Igbo mythical traditions. Though a great primer for reluctant readers and those looking for a brief overview and laudable for its inclusion of non-Western traditions, readers hoping for a deeper dive will need to look elsewhere. Ample illustrations add interest and support the text.

An amuse-bouche of world mythology that may leave readers craving more.