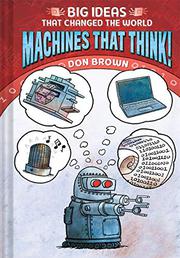 From the Big Ideas That Changed the World series, volume 2

How rows of rocks evolved into the intricate circuitry that runs our homes, drives our cars, and orders our pizza.

Brown lets al-Khwārizmī, the Muslim mathematician who popularized Arabic/Hindu numbers (most notably, for Brown’s purposes here, “0” and “1”), take the role of tour guide. He squires readers through centuries of watershed developments from the abacus and mechanical Pascaline calculator to the punch cards of Joseph-Marie Jacquard, ENIAC, IBM, the transistor, and robots. Closing with an explanation of the Turing test, he offers a mildly cautionary view of the increasingly pervasive roles computers play in our daily lives (“will they be doing all the thinking for us?”) and an appended disquisition on binary numbers. Along the way he chronicles both major and incremental advances as well as offering nods to significant thinkers and doers familiar (Ada Lovelace, Steve Jobs) or otherwise—notably Jean Jennings and six other women charged with figuring out how to program ENIAC but not invited to its unveiling. Though he acknowledges in an afterword that his cast is largely White, European, and male he does what he can throughout to diversify it…and cogently observes at the end that the “domination of the West in the sciences has ended.” Panels are drawn in a loose style that lightens the substantial informational load.

Another terrific case study on the power of a big idea to work profound changes in our lives.