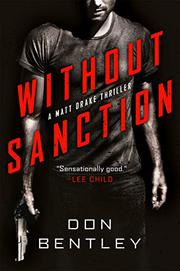 A spy dealing with personal trauma is called back into action to stop the use of a dangerous chemical weapon.

A former Army helicopter pilot and FBI special agent, Bentley delivers his debut novel with the introduction of Defense Intelligence Agent Matt Drake. After an op in Syria went sideways and his best friend was maimed, Drake walked away carrying heavy emotional baggage. Haunted by those he couldn’t save and in self-imposed exile from his wife in order to protect her, Matt wants nothing to do with his old life at the Defense Intelligence Agency. But when he's brought back under duress to help stop terrorists from using an untraceable chemical weapon against Americans, Drake feels a lurking sense of obligation, and before he knows it he's back on duty. The seeming purity of Drake’s call to serve is contrasted with the petty political infighting within the highest reaches of government. A chief of staff for the president is angling to jam a CIA director who has political ambitions of her own, and Drake’s mission falls right in the middle of this elaborate political scheme. While the flow of the story seems most natural during the shoot'em-up action scenes, this is a novel with an emotional core, and that may be what makes it stand out from other thrillers of a similar ilk.

A page-turner with the kind of small details that lend unquestionable authenticity.