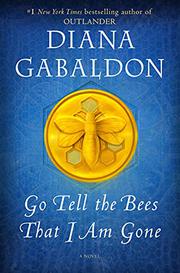 GO TELL THE BEES THAT I AM GONE

From the Outlander series, volume 9

The ninth book in Gabaldon’s Outlander series finds the Fraser family reunited in the midst of the American Revolution.

It’s 1779, and Claire and Jamie Fraser have found each other across time and space and are living peacefully in the American Colony of North Carolina. This novel opens with the mysterious return to Fraser’s Ridge of their daughter, Brianna, her husband, Roger, and their children. In a previous book, Brianna’s family time-traveled to 20th-century America and planned to stay there permanently. It’s clear that Jamie and the others expect the troubles the family faced in the future will follow them to the past; unfortunately, after their return, the book pauses for several hundred pages of exposition. Gabaldon reintroduces characters, summarizes past events and tragedies, and introduces new characters. The text features not one but two family trees (the one in the back is updated to include the events of the book), and readers will need both to keep track of all the characters and relationships. The Outlander series has always been concerned with themes of time and place, and this novel contains intricate details and descriptions of daily life in Colonial America, clearly the result of countless hours of research. But Claire and Jamie have always been the major draw for readers. Now that they are grandparents, their love story is less epic and more tender, exploring the process of aging, the joys of family, and the longing for community and home. The last third is more plot-driven and action-packed, but the cliffhanger ending might leave readers feeling as if the book is just filler for the promised 10th installment.

Lots of buzz after a seven-year hiatus, but even die-hard Outlander fans might need more action.