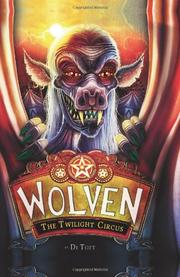 From the Wolven series, volume 2

An old foe sets a deadly trap for two young werewolves in a sequel framed by family reunions and positively festooned with hideous vampires.

Magical creatures are rising up all over Europe. Recently bitten teen Nat and his shapechanging BF Woody have joined Nat’s father and a traveling circus of fauns, furies and other cryptids (“All the incredible things you are about to see are REAL!” the Ringmaster disingenuously informs excited audiences) in France. Almost immediately, they are attacked by flights of fantastically ugly bloodsuckers under the command of a malign and crafty vampire revived by the previous episode’s über-villain Lucas Scale. Fortunately the lads/cubs have on their side not only Alexandra Fish, hypercompetent young vampire slayer and British secret agent, but Woody’s Wolven relatives—a reclusive clan of particularly powerful white werewolves. Along with vampires that explode in gross showers of gooey ichor when staked, Toft tucks in the odd colorful turn of phrase (“…feeling about as nervous as a small nun at a penguin shoot”) and fart joke to lighten the load. She leaves her doggy buddies at the end alive and resolved to join Fish in putting paid to Scale’s demonic schemes.

Definitely a continuation rather than a freestanding episode, but the author keeps her ongoing plot galloping along and adds an assortment of marvelous new creatures to the cast.