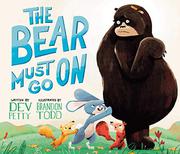 THE BEAR MUST GO ON

Rabbit, Squirrel, and aptly named Other Squirrel (who has slightly redder fur than Squirrel) are a flurry of activity. They are going to put on a show. “A BIG show.…The BEST show!” It will have hats (tall ones), tickets (shiny ones), and a curtain (red—no, green). There are many decisions to be made. Bear, however, does not want to be part of it. He is too shy. He would prefer to be the note taker. Rabbit, Squirrel, and Other Squirrel fire off ideas, amending one another’s at furious speed, and Bear writes them all down. Scribbles appear in the white space surrounding the boulderlike ursine’s head. The ideas pile up; debut illustrator Todd deftly covers an entire page while Bear hunches in the middle, furiously writing. He hums a tune to keep himself calm. On the night of the performance, everything seems ready. Everything except…the show! They were so bogged down with the details, no one figured out what the show would be. The title gives away the ending from the very start, but Bear’s pluck is nevertheless laudable. Petty’s comedic quips are echoed in the frenzied art, with Bear looming large yet timid to ground it all. Limited, skilled use of panels helps to control the pacing.

A snort-inducing lesson of both bravery and preparation.