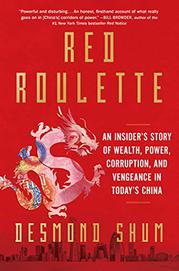 An Insider's Story of Wealth, Power, Corruption, and Vengeance in Today's China

A Hong Kong–raised entrepreneur chronicles a high-flying life of wealth and political connections, eclipsed in harrowing fashion by a new wave of Chinese Communist Party authoritarianism.

In September 2017, Shum’s ex-wife and business partner, Whitney Duan, disappeared without a trace from Beijing, most certainly among the countless victims of trumped-up corruption charges by the relentless arm of Xi Jinping’s Communist Party apparatus. Together, Shum and Duan had built a vast fortune from real estate dealings in China, from the late 1990s through the global recession of 2008, a span of time during which China fully embraced private entrepreneurial energy in order to jump-start the economy. Around 1997, sensing the “go-go energy” of the new boom, in which “stories of instant millionaires and financial sensations” abounded, the couple leapt at the opportunity to enrich themselves, their families, and associates. However, the same intricate political connections that Duan had assiduously cultivated through the years, such as with Zheng Peili (“Auntie Zhang”), the wife of former premier Wen Jiabao, would prove the couple’s undoing as the political winds began to shift with the accession of Xi in 2013. Through a deliberative, slow-building, suspenseful narrative that reveals numerous insights about the mechanics of power and greed, Shum chronicles his humble early beginnings in Shanghai, then Hong Kong, where his family moved for more opportunity and he excelled as a swimmer, through college at the University of Wisconsin and attempts at trying his hand in the fledgling field of private equity. He effectively shows how Duan, a boldly calculating investor from a humble background, helped mold him into a highly successful entrepreneur. While Shum insists that they both fervently believed their wealth could foster social changes, he learned early on that what the Party gives, the Party can take away. Observers of contemporary Chinese affairs, consistently intriguing and murky territory, will find much to interest them here.

A riveting look inside “the roulette-like political environment of the New China.”