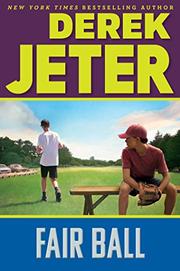 by Derek Jeter with Paul Mantell

Crises loom when a close friend suddenly turns standoffish, and the distraction affects young Derek’s play on the field.

Exemplifying No. 4 of Jeter’s Life Lessons, “The World Isn’t Always Fair,” the episode chronicles the drive to a citywide Little League trophy. The story acts as a platform for homilies about coping with bad breaks in baseball (and therefore life), frequent expostulations about fairness, and discussions of diversity with allusions to racial and class prejudice. Disturbed and angry that his wealthy, white friend Dave is abruptly avoiding him, Derek has such trouble keeping his head in the game that he whiffs at the plate and even muffs a play on the way to a playoff loss. It’s only a setback, though, and so amid pep talks and heroic plays capped by a walk-off inside-the-park home run, he goes on to lead the Indians (a team name that passes without comment here) to ultimate triumph. Meanwhile Derek defends a frenemy from bullies at school, studies for his finals, turns 11, and, with little sister Sharlee, absorbs the message that differences should be celebrated. The problem with Dave, which turns out to stem from a parental command to steer clear of the biracial, middle-class Jeters, is solved with an air-clearing tête-à-tête between the moms, and by the end everyone is looking forward to an awesome summer.

Fans of Jeter and Mantell’s earlier books will find more of the same here.