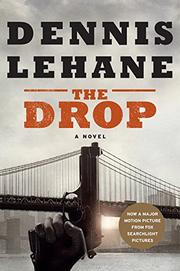 The bard of blue-collar Boston crime returns with a sleight-of-hand novel tinged with sin and redemption.

The latest from Lehane (Live by Night, 2012, etc.) is a novel with an unusual genesis, and it’s shorter and less intricate than usual. It began when he was asked to adapt one of his short stories (“Animal Rescue”) for a movie. Though his novels have seen success on the big screen, this was his screenwriting debut, and it preceded the writing of this book, which might be dismissed, in lesser hands, as a “novelization” of the film. It’s richer than a mere re-creation of a movie on the page because the author gets inside the heads and thoughts of his characters in a way that a movie generally can’t. And this particular perspective is crucial when it comes to protagonist Bob, a keep-to-himself bartender who works for Cousin Marv. Both men, like pretty much every man in their neighborhood, have some sort of shady past, but the two have apparently gone comparatively straight. Yet Cousin Marv’s bar remains used by the Chechen mobsters who own it as a money drop for transferring funds. Such is the backdrop for what appears to be the main plot, in which lonesome, loveless Bob finds a beaten puppy in a trash can and is persuaded by a woman who witnesses the incident (and who has her own questionable past) to take it home. Since “all he wanted was to not be alone,” the connection with both the dog and the woman proves so transforming that he “suspected they might have been brought together by something other than chance.” But there’s another connection, a crazy thug and rumored killer who claims that both the dog and the woman are his. As the novel progresses, every character has secrets and revelations—except maybe Rocco, the dog—as the plot pivots in some surprising directions.

Even one of the novelist’s lesser efforts has the signature style, edge and heart to delight fans.