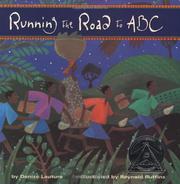 RUNNING THE ROAD TO ABC

A poetic text charts the experiences of six children as they run through the Haitian countryside (``six days each week, forty weeks each year, for seven years of their short lives'') on their way to and from school. Lauture (Father and Son, 1993, etc.) pens a lyric evocation of childhood—or even national—struggle lightened by innocence and leavened by the beauty of the natural world, but it retains a strongly adult sensibility: ``On the roads of white turf and roads of red clay they run. On roads of rocks and roads of mud they run. If they take a wrong step they do not complain.'' The writing often soars (the children ``gaze at the heavens, rise before the sun, sail with the moon, and dream of stars to read and write') but many young readers may not sit still for it. Ruffins's bright gouache paintings are appealing; they summon the vitality of Haitian primitive art and are similarly detailed, image-rich and jewel-toned. A book that's worthy, but wanting. (Picture book. 5-8)