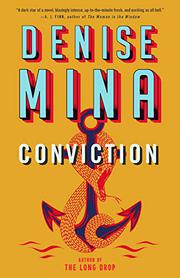 A compelling, complex thriller as modern as tomorrow.

Mina (The Long Drop, 2017, etc.) leaves historical Glasgow and sets this crackling tale in the very moment. Sophie Bukaran is living as Anna McDonald; she's hidden herself in Glasgow, in marriage to a lawyer, in being mother to two girls. Then one November morning, between episodes of a true-crime podcast called Death and the Dana, her life "explode[s]." Her best friend, Estelle, is at the door, and Anna's husband reveals that he and Estelle are lovers and they're leaving with the girls. Anna considers suicide, but the podcast distracts her. Leon Parker and his family have died aboard the Dana, and the ship's cook has been convicted. The podcast asserts that the cook could not be guilty and the deaths were the result of a murder-suicide committed by Parker. But Anna knew Leon Parker and feels he could not be the culprit, so she decides to try to learn more about his fate. When Estelle's anorexic and feckless husband, Fin, a minor rock-and-roll celebrity, appears at her door, he is caught up in her decision, and they eventually create a companion podcast that details their explorations. But in the process Anna and Fin are photographed and the pictures posted online, so Anna's quest becomes entwined with threats to Sophie Bukaran's life. Years earlier Sophie was raped by members of a beloved football team, and her accusations threatened the team's reputation and value. When the only corroborator of her testimony was silenced, Sophie was discredited in the usual manner: Her morals were questionable, she was possibly drunk, she was seeking money. Dismissed and subjected to public vilification, Sophie disappeared. But a new witness has come forward and could confirm Sophie's accusations, and her reappearance again threatens a financial empire. As Fin's podcast becomes wildly popular and he and Anna begin to unravel the mystery of Leon Parker's death, the assassins seeking Sophie close in.

This one has it all: sexual predation, financial skulduggery, reluctant heroism, even the power of social media.