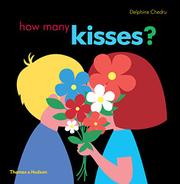 A kissfest of a counting book.

Bold cover art depicts two children in silhouette, looking at each other. The first holds a bouquet in front of both their faces, and they appear to be kissing behind it. Open the book, and the frontmatter text directs readers to blow kisses at the characters on interior pages (which makes one wonder why the cover art doesn’t have a character blowing a kiss, too). The first spread shows a cat sleeping on the recto, while on the facing verso there appears a large, yellow numeral 1 leading off the text: “1 kiss for the cat sleeping on the sofa.” Beneath this direction is a yellow dot to reinforce the numeral 1. The next spread follows this design, but with the numeral 2 and two blue dots to count the kisses the reader should blow at the depicted dog. Ensuing pages count up to 10 kisses, with each spread depicting various animals and people (all of whom appear white). Then there’s a leap from 10 to 17 kisses for an owl, 64 for the sun, 823 for the wind, and “millions…for all the children playing around the world!” (Here a few children of color appear in small scale.) This playful, dramatic increase should provoke lots of frantic kiss-blowing on the parts of young readers—and laughter, too.