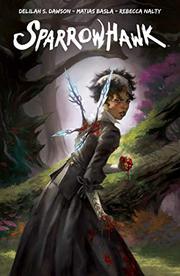 What if Alice’s Wonderland was full of gothic savagery rather than curiosity and whimsy?

The illegitimate, mixed-race child of a white naval captain and a brown, enslaved mother she has never known, Artemisia has been mistreated and neglected by everyone around her except her sister, Caroline. She finds herself unwillingly pulled into another world so unlike her own that she realizes she must become someone—something—else in order to survive and return to her old life. In need of direction, she happens upon Crispin, a furry, antlered creature who is a most unreliable escort. With unknown but clearly ulterior motivations, Crispin volunteers his services to Artemisia. Our young heroine soon learns that she must fight and best beasts and monsters of this new world in order to escape. But will she have to become a monster herself in order to defeat one? Dawson (No Country for Old Gnomes, 2019, etc.) creates a captivating, dark, and violent world of faeries and other magical, mythical creatures. Acceptance, identity, transformation, and the conundrum of human nature are prevalent themes in this story. Readers follow Artemisia as she toes the line between holding on to who she is and becoming that which she detests. The artwork—while occasionally confusing—is vibrant, enhancing the otherworldly feel.

An imaginative contemporary tale reminiscent of the Brothers Grimm.