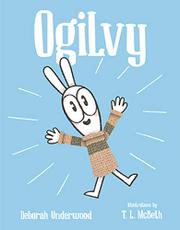 Clothes do not make the bunny.

When Ogilvy, a bunny of unknown gender, moves to a new town, they are initially excited to play with other bunnies in their neighborhood. But Ogilvy finds themselves the center of unwanted attention because of their attire: a long, knit turtleneck. The local rules are soon broken down: Bunnies in dresses can knit and play baseball, and bunnies in sweaters can create art and go rock climbing. No crossovers allowed. But what is Ogilvy wearing? Is it a dress or a sweater? Ogilvy decides daily it’s one or the other depending on their mood, until run-ins with the unofficial fashion police finally come to a head. In that moment, Ogilvy finds their voice and convinces the town that it’s OK to break the mold and try new things. It’s a strong message told subtly. The book is multifaceted, making it relevant to everyone, but it will particularly resonate with gender-nonconforming kids, transgender kids, nonbinary kids, and kids who are exploring gender fluidity. It does a lot of heavy lifting. Underwood’s rhyming text flows smoothly and adeptly functions without third-person pronouns, making Ogilvy’s particular gender identity a non-issue. McBeth’s illustrations digitally collage knitwear onto cartoon bunnies and match the mood nicely, but it is odd that Ogilvy’s clothes are a duller palette than the other bunnies’.

Drag queens may throw some shade at Ogilvy’s wardrobe, but that’s this book’s only flaw.