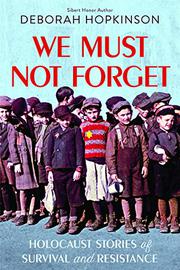 WE MUST NOT FORGET

Holocaust Stories of Survival and Resistance

This essential collection of Holocaust survivors’ memories draws on oral histories, interviews, and other primary sources.

The stories of Jewish children and teens who survived against all odds are told in ways that readers will never forget. The book is divided into three sections defined by geography, with stories from Germany and the Netherlands, France, and Poland. Each section has chapters dedicated to individual stories; the subjects are first briefly introduced in an “about the people” preface that provides helpful context as well as relevant dates to orient readers. Central to all the histories are the unbelievably brave helpers. Most of the children were hidden by neighbors; one photograph depicts an Indonesian Dutch family with the Jewish child they protected. Some people smuggled children across international borders, including a Jewish activist who helped others flee to Spain. Some were religious, for example a priest in a French village and the American Friends Service Committee. An ongoing theme is that morality is complex in times of crisis. The collaborationist Jewish Council could save hundreds only by helping the Nazis. Many of the historical photographs are quite moving, and links to recordings of the survivors’ telling their stories are provided throughout and extend the impact of the text. One of the survivors died of Covid-19 as the book went to print, emphasizing the urgency of recording these narratives.