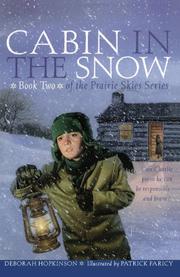 CABIN IN THE SNOW

The Keller family, a free-soil Kansas family recently transplanted from Massachusetts, faces the struggle of their first winter in Hopkinson’s second installment in the Prairie Skies trilogy that began with Pioneer Summer (p. 570). Mr. Keller and his son Charlie leave for a supply trip to Lawrence that ends up being anything but routine. They hear of the murder of a free-soil man and, on their trip home, end up in the middle of an argument between the 15 pro-slavery men and some free-soil farmers. Fearing that the town of Lawrence might be at risk, Mr. Keller agrees to join the men. Nine-year-old Charlie is left with the responsibility of driving the oxen team home and becoming the man of the family in his father’s absence. With his mother about to give birth, his sisters to care for, and the worries about dwindling food supplies in the winter ahead, Charlie’s plate is full. There is no time for his characteristic daydreaming and birdwatching. When Charlie runs into Mr. Morgan and his daughter Flory again, the Keller family is torn. On one hand, the Morgans are in need of a safe place to stay and the children remember them fondly from their time together on the steamboat. On the other hand, the Morgans, with their pro-slavery ideas, stand for everything the Kellers are opposed to. When Mama gives birth early, the Kellers have little choice but to trust and accept help from Flory and her father. The family must rely on each other, and the help of others, to make it through a terrible blizzard without Papa. Once again, Hopkinson tells a good story, steeped in rich history and research, and leaves her young readers satisfied, yet ready to know more, promised in the forthcoming Our Kansas Home. (author’s note, recipe, song lyrics) (Fiction. 6-10)