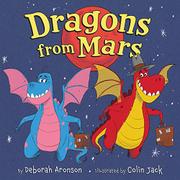 Be careful what you wish for. You might just get it (fiery breath and all).

Rhyming text tells of a redheaded white boy named Nathaniel who one day looks up at the sky and wonders, for no particular reason, if dragons live on Mars. Inspired, he sends an email to the planet inviting these hypothetical dragons to Earth to stay with him. Molly and Fred take the boy up on the offer, but though they obey his mother’s command to set nothing on fire, they wreck the house anyway. Chagrined, they repair it and even add a dragon-sized wing for themselves. Putting aside the fact that there is no reason to involve Mars in this story (except to make for an interesting title), Aronson’s storyline is as familiar as a well-worn pair of old shoes…and twice as dull. The dragon antics are not particularly naughty, the chaos is subdued, and the idea of having a magical pet/friend has been done far better in such books as A Dragon Moves in, by Lisa Falkenstern (2011). The limp plot and tired rhymes cannot be saved, even by Jack’s energetic art, which seems to be just as puzzled by the Mars connection as readers will be. Employing an animator’s aesthetic, Jack depicts very normal dragons that display no hint of their extraterrestrial origins.